Today 8/10/16, I had a short wander along the Clyde River Road, Shelburne Co, hoping to find a few darners. The habitat should hold some of the species I have yet to find, Mottled, Subarctic and Zigzag, unfortunately I didn’t see a single darner along the whole 16km route. Not surprisingly most of the water on the bogs had gone as the drought continues in southern Nova Scotia. The Clyde River itself is something of a disappointment. It should hold a broad range of species but the water quality seems poor, likely the result of unpleasant things being discharged into it.

I did put up the odd ode off the graveled section of the road but they rarely returned for a view. At the same spot I reported as having Brush-tipped Emerald on a previous visit, I found three vying for hunting rights over a drying sphagnum bed. It was up around 28°C and they weren’t going to land so the shots had to be in flight. Fortunately they do pause for a split second at times. The flight shots, while no pin-sharp due to manual focus, depict the species well, with the curved abdomen and brush-like appendages obvious at times.

This White-faced Meadowhawk was the only one I found. 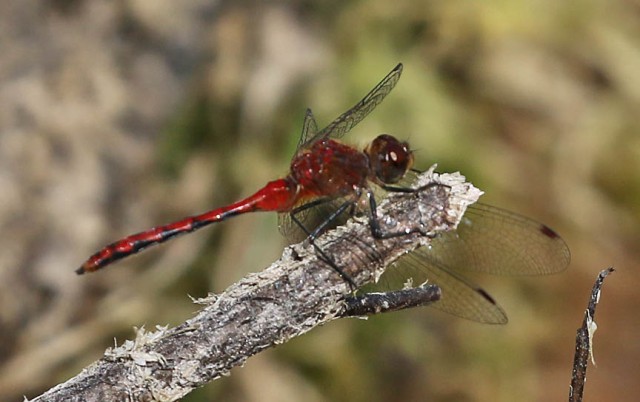 Where a few weeks ago dancers were abundant, I only saw this single Variable Dancer this time.

Does anyone know whether Cherry-faced or Ruby Whiteface is the predominant species in southern NS? I’m seeing the odd one which I think are Cherry-faced but I have yet to catch and examine one.

I'm a birder, I also look at odes and leps, busy guy.
View all posts by mdinns15 →
This entry was posted in Dragonflies in Nova Scota, Nova Scotia Odes. Bookmark the permalink.